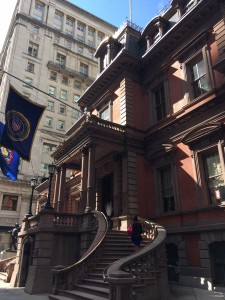 Working to Form a More Perfect Union was the theme, with special emphasis on honoring women in public service and government. After an eventful networking session, attendees had the chance to hear three accomplished female icons share their personal stories about lessons learned in business.

“The secret of success is to never accept failure as final,” stated opening panelist and award winning business professional Angela Dowd-Burton. She told her story of resiliency, noting: “risk taking and recovering from failure are the strength of leadership.”

DGS Deputy Secretary of Administration Beverly Hudson followed, discussing the unconventional path she took on her road to professional success. “In your career choices have a plan, but always be willing to change that plan if it doesn’t fit,” Hudson advised. She went on, encouraging WBEs to: “Create opportunity for yourself. Know your business, but above all, know yourself.”

Final remarks were given by the Honorable Marian B. Tasco, a politically savvy Philadelphia public official whose impressive list of achievements was further accentuated by a remarkably down-to-earth disposition. “I never had a plan,” she recalled. “Whatever happened, I figured I tried.”

What can these women teach us?

To sum it up in the words of Angela Dowd-Burton: “Be bold, dream big, enroll others in that vision and GO FOR IT!”