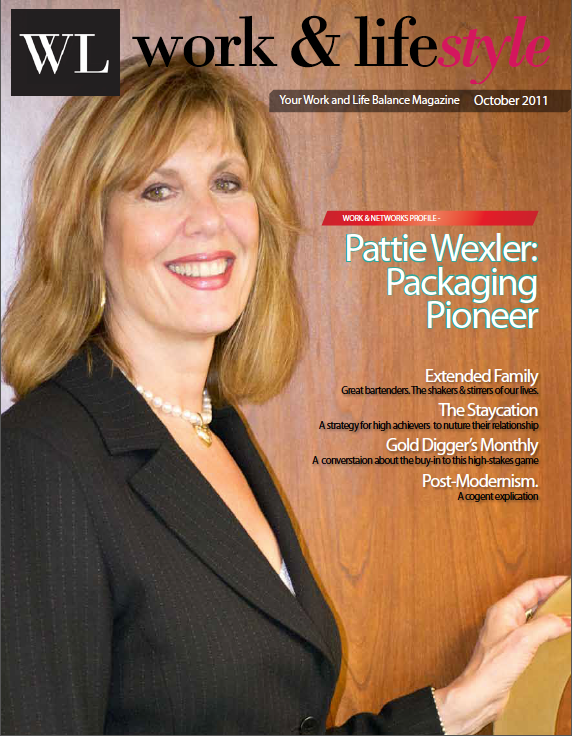 The first thing that stood out to me about Pattie Wexler was not her bright eyes, speaking both to her high energy and sharp intellect, but her handshake, the handshake being the true first impression you get in the business world. What Pattie’s handshake told me, which was later confirmed during our interview, was that she is a strong, independent woman who has gotten to where she is today through tireless work, unfaltering integrity and always going with her instincts. Pattie Wexler is the cofounder and head of Wexler Packaging Products, based out of Landsdale, PA.

In the manufacturing industry, Wexler Packaging Products is synonymous with “banding” – an industry term for a type of eco-friendly packaging which takes the place of a cardboard box in manufacturing and shipping. Rather than packing, say, 24 boxes of hair dye into yet another box to be delivered to a seller such as CVS, Wexler offers an alternative for the manufacturer by providing the technology to band together the items, bundling them, allowing them to be as stackable as boxed items, cutting cost and waste substantially.

Paper banding as packaging for a product also means it can serve as a packaging alternative to branding, where all that a box offers for an item, such as ingredients, description, logo, etc., can instead be printed on a customized paper band. Outside of banding, Wexler is a distributor for strapping machines (similar to banding, only the material is plastic), tying machines (think, twine tying a stack of books together), counting machines, and the newly acquired liner-less labeling systems (which eliminate the standardized liner accompanying labels found on water bottle labels, for example).

As a leader in cutting edge packaging technology, Pattie is truly her father’s progeny. Founding Wexler in 1974, her father started out small, selling tape, labels, stretch wrap and selfseal paper bands (among other things), but it was the paper bands which proved to be seminal in the Wexler family quest to sell a viable, eco-friendly packaging technology on an international scale. Joining him in 1978, Pattie was lead sales rep, and was one of the only women working in the industry at a time when there was barely a category for alternative packaging. Pattie laughs when she remembers how she made the warehouse guys “nervous” as a young woman with the authority of an industry pro. “You just have to really know your stuff, and when you gain respect you gain business” – and gain they did.

As their business grew and became more focused towards the niche market of paper banding, it was not long before Pattie became known at the “Banding Queen” to manufactures opting to use automated banding over laborious hand banding, and in the late 80s Wexler Packaging Company became the sole distributor of EAM/Mosca paper strapping machines in the United States. Thirty-three years and many clients later, Pattie commands Wexler in a small but bustling office housing her sixteen employees.

Though now retired, Pattie’s father remains the ever present sprit at Wexler, having his own desk in Patti’s office, untouched and uncluttered, as if waiting for him to come sit down and work anytime. Paired with the countless pictures decorating her office walls of her and her family, some recent and some grainy black and white, the importance Pattie places on family is very much what defines her as a person both inside and outside of the office. At work, Pattie talks about her employees like they are brothers, sons, daughters – they work together, drink together, and play together (they even karaoke together!). Pattie jokingly remarked, “I don’t have a ‘President’ sign on my door because I feel a lot more like a ‘camp councilor’” – if it looks like anyone has slept in and might miss a lunch meeting with a client, Pattie will drive to their house to wake them up; if anyone is traveling she checks in with them at takeoff and landing. It is this dedication to her work family, and to her company in turn, which has undoubtedly been integralto Wexler’s growing success as one of only a few paper banding machine distributors in the United States.

“What do I do when I’m not working? I don’t know, I know I watch movies, see my family, but do I have any hobbies….? I’m not complaining, but I don’t have time for a hobby!” Like many other small business owners, Pattie’s business is her life; but this is not a begrudging relationship for Pattie, in fact, she doesn’t see how she could be so successful if she didn’t put 100% of what she could into Wexler, and she is happy to do so. But a little bit of life outside of work is important, so apart from watching an hour of this or that before crashing for the night, Pattie often makes time to see her friends one on one, and makes sure to grab a little me-time at the gym, because “the better I feel about myself, the better of a leader I am”. And during the time she does spend at home, home becomes her sanctuary, her haven after a god-knows-how-long day. Taking advantage of having to travel frequently on work on trade shows and the like, everywhere Pattie goes she tries to experience just a little bit while she’s there, and really tries to see the places she goes rather than passively experience them.

As a woman, as the owner of a business which had to carve out it’s own category, Pattie laughed when I asked her what advice she has for future entrepreneurs, not feeling like an expert, but rather someone who has combined luck, wit and hard work to accomplish her goals. But after hearing the story of how Wexler was formed and subsequently grew, it is clear that the success of Wexler can be directly attributed to the qualities which define Pattie as a leader. It is the quality of integrity, instilled in her by her parents, a core value of Pattie’s, exemplified by her devotion to her family and employees; in business this translates into always being fair, spending money to keep customers happy. It is also the tireless dedication which she has had from day one in 1978, working 10-16 hour days, making the choice as young adult to not hang around with her boyfriend all day but put 100% of herself into the business, putting “all of her oars in the water” as she would say.

Finally able to put her finger on it, Pattie offers three gems of advice for ‘youngins’ starting their own business: always have your end goal in mind, don’t bullshit people, and pay attention to new business opportunities, because even if it seems like you’re too busy to make a change, it could be the change which gets you from running a business out of your home, to sitting behind a walnut desk, office door open to the employees which will one day be the future face of your company.