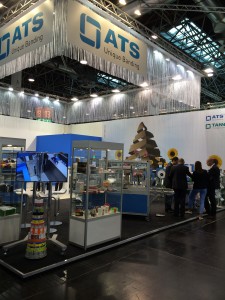 This year, Wexler Packaging Products had the privilege of attending several days of interpack 2014 with the ATS-Tanner Group, our equipment and materials partner. The expo was held in Düsseldorf, Germany at the Messe Düsseldorf Fairgrounds from May 8-14, 2014.

Efficiency was a dominating theme at interpack 2014, and ATS was right on target. Located in Hall 13, Stand B47, the ATS-Tanner booth presented “efficiency through banding” showcasing banding solutions for a variety of industries ranging from manufacturing and pharmaceuticals to graphics and food. Among the featured ATS Banding Machines and Automated Systems was the ATS•US-2000 TRS-SW-L3. Wexler customers in the graphics/corrugated industries like using this system, as it eliminates the strap they were previously using from cutting into their high-end laminated lithographic product.

The ATS-Tanner Group also debuted a newly designed booth at interpack, featuring a backdrop of the Matterhorn designed to represent banding material. It had the ATS motto of “Swiss Quality” written all over it. The new design encompasses the four brand values that make ATS-Tanner strong while providing customers with the most benefits: 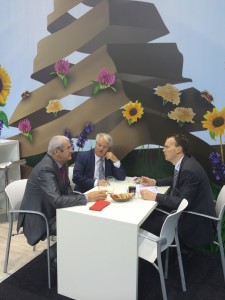 CLASSICALLY SWISS. For quality at its peak.
BIG ON SOLUTIONS. Putting a face on advice.

Overall, interpack 2014 was characterized by an outstanding atmosphere. The show featured approximately 2,700 exhibitors in the 19 halls of the completely booked Düsseldorf Exhibition Centre.

“It was a great show,” notes first-time interpack attendee and Wexler Regional Sales Manager Ryan Perlman, “Lots of amazing machines, entertainment and sensational food, which is always a bonus.” Perlman went on, “the highlight of the show for me was walking the floor with Al Tanner, ATS Founder & President. He showed me more in two hours than I found in two days!”

With the official report finally in, interpack 2014 has set a new record for itself. Visitor attendance cracked the 175,000 mark, featuring 66% foreign visitors from 120 nations – an impressive jump from interpack 2011 which featured an attendance of only 166,000 visitors from 60 nations. This international profile ranks interpack as the packaging world’s most important meeting place. In addition to setting a new record, interpack has now reached a top rating across all Messe Düsseldorf events.

Interpack showcases every three years and is the No. 1 leading processes and packaging trade fair worldwide. Interpack will return to Düsseldorf in spring 2017, the exact dates will be announced at a later time.